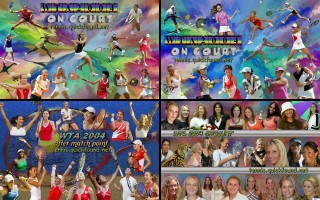 
WTA 2004 4-in-1 Wallpaper (desktop background image):
all 4 wallpapers listed below on 1 page, with 66 images of 43 different WTA players

Top row:
-- 19-year-old Svetlana Kuznetsova from St. Petersburg, Russia, got all dressed up for some photos while in Bali for the Wismilak International tourney on September 18, 2004, only a week after her US Open victory. Svetlana won the Bali tourney, too.
-- Australian Open & Olympic champ Justine Henin-Hardenne from Marloie, Belgium, 21 when this photo was taken, was posing with the mayor (politicians don't qualify for this wallpaper) of Indian Wells, where Justine won another big title, in March, 2004.
-- 35-year-old German former WTA # 1 Steffi Graf, winner of 107 WTA titles, including 22 Grand Slams, and 34-year-old Gabriela Sabatini of Argentina, winner of 27 WTA titles, including the 1990 US Open, pose for photos while in Berlin to play an exhibition match at the site of the German Open on September 25, 2004. After the match, Center Court at the venue was renamed "Steffi Graf Stadion."
-- 23-year-old French Open champ Anastasia Myskina from Moscow, Russia, shown on September 12, 2004, was one of several players who did a little modeling while in Bali for the Wismilak International tourney.
-- Lindsay Davenport 28, from Laguna Beach, California, smiled at a kids event during the Bank of the West Classic in Los Angeles in July, 2004. Lindsay had reason to smile: she was in the midst of a 4-tourney-in-a-row winning streak that raised her total number of WTA singles titles to 44.
-- 22-year-old Serena Williams displays a bobblehead doll version of herself at the Bank of the West Classic in Los Angeles on July 19, 2004. The bobblehead giveaway promotion helped to attract a sellout crowd.
-- Jelena Kostanic, 23, from Split, Croatia, smiles for the camera while attending a players party during the Bank of the West Classic at Stanford, California on July 14, 2004.
-- 19-year-old Gisela Dulko from Buenos Aires, Argentina, gave the photographers some work during 2nd-round Wednesday's rainout at The Championships at Wimbledon on June 23, 2004.

Middle row:
-- 4 days before her 28th birthday, Jennifer Capriati poses with a feline friend of the cheetah persuasion, during the NASDAQ-100 in Key Biscayne, Florida on March 25, 2004.
-- Chris Evert, 49 (and looking so good she could start making Bowflex commercials next year), and 17-year-old Wimbledon champ Maria Sharapova laughed while attending the premiere of the movie Wimbledon in Beverly Hills, California, on September 12, 2004. Chris, now publisher of Tennis magazine, retired in 1989 with a 1,309-146 win-loss record, the best in pro history, which brought her 157 titles. Maria, with 5 titles, has a way to go, but if she plays for 18 years...
-- 21-year-old Elena Bovina from Moscow, Russia admires her trophy after winning her 1st "upper tier" title at the Pilot Pen Open in New Haven, Connecticut on August 28, 2004.
-- Michaella Krajicek, 15, of the Netherlands displayed her trophy for winning the US Open juniors competition on September 12, 2004. Michaella, with partner Marina Erakovic from New Zealand, won the juniors doubles title, too.
-- 16-year-old Tatiana Golovin, born in Moscow, raised in Paris, and trained at the Bollettieri Academy in Florida, was photographed arriving at the pre-US Open "Glam Slam" party in New York City in August, 2004.
-- Venus Williams, 23 (when the photo was taken), from Palm Beach Gardens, Florida, smiled for the camera at the German Open in Berlin (which has a very nice photo gallery, with an archive for the past few years) on May 3, 2004.
-- 29-year-old Ai Sugiyama from Kanagawa, Japan, does a little modeling while in Bali for the Wismilak International, on September 18, 2004. 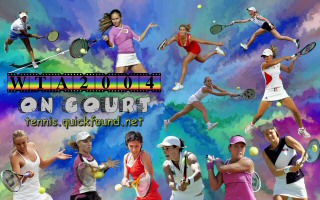 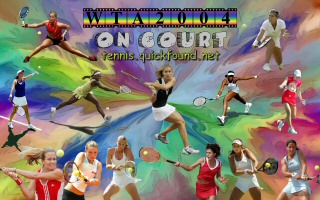 Middle row:
-- # 9 Venus Williams performs her ritual post-match wave to the crowd after defeating # 41 Jelena Kostanic in the 2nd round of the French Open on Thursday, May 27, 2004.
-- # 1 Justine Henin-Hardenne is happy after defeating # 36 Fabiola Zuluaga 6-2, 6-2 in their semifinal at the Australian Open on Thursday, January 29, 2004. Justine defeated her fellow Belgian Kim Clijsters in the final on January 31.

The background image of racquet and ball is from a photo of Silvia Farina Elia at the Foro Italico in Rome in May, 2004.

This page's URL is: http://tennis.quickfound.net/wallpaper/wta_wallpaper_2004.html