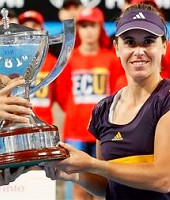 Agnieszka said: "Yesterday was so windy and then today was so hot, so the conditions were difficult this week, but I had a really good week anyway. I played five good matches without dropping a set so I think I'm ready for the Australian Open." WTA story

Na said: "Klara played well, and I managed my mood swings well, and I'm glad I made it. Winning the title certainly helps boost my confidence for the coming weeks, but it also depends on how I'm playing on the courts. Confidence itself won't guarantee a win." WTA story

Klara said: "It was about a few points today but she really proved she's a top player. She played her best from 5-all. She's playing unbelievably fast and flat, and she's hitting her backhand down the line very well. To me she's one of the Top 3 players right now and I hope she can make it there. There's no way to be sad about losing. I lost to a top player and I'm happy to reach the final."

Ana still leads Anabel 3-2 in career matches. Their previous encounter was on a hardcourt in 2011 in the final at Bali, when Ana defeated Anabel 6-3, 6-0.

This page's URL is: http://tennis.quickfound.net/wta_results_2013/brisbane_auckland_shenzhen_results_2013.html