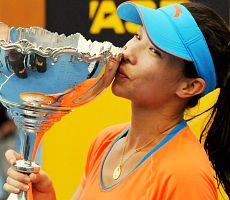 Petra's partner Tomas Berdych also defeated Richard Gasquet of France in the men's singles, so the dead mixed doubles rubber was not played. It is the second time that the Czechs have won the Hopman Cup.

On Sunday in Auckland, New Zealand, in the rain-postponed final of the ASB Classic, a semifinalist at the 2010 Australian Open (and at Wimbledon in 2008), 28 year old #48 (career high: #15, her rank down due to a prolonged wrist injury) Jie Zheng from Cheng Du, Si Chuan, China, defeated the 2010 Auckland finalist (and champion at Marbella, Spain), 29 year old 4th seeded #20 (career high: #10) Flavia Pennetta of Italy (residence: Verbier, Switzerland), 2-6, 6-3, 2-0 retired when Flavia could no longer continue due to a low back injury (Jie is shown with the hardware after the match).

Jie said: "The first set was a little tough for me. Many of the games went to deuce but I lost all of them. My husband came to the court and told me it was just a few points and I still had a chance, that I had to keep fighting. I always fight hard. In the end, I was a little bit lucky. I'm sorry for Flavia. I wish for her that it gets better for next week...
"It has been more than five years since my last title. I had two big injuries—my wrist and my ankle—but now I'm back." WTA story

Flavia said: "I don't know what [the injury] is yet. I'm going to have an MRI done tomorrow, I think. At 4-2 in the first set was when I first felt it. I started to go down with my leg to be ready for the return and pain started coming out. When I was serving it was really painful... it was not good for me to keep going on the court... It's still a good week for me, though. I'd like to be in the finals every week, singles and doubles. But sometimes your body needs a few days of rest."

Jie and Flavia are now tied at 3-3 in career matches. Their previous meeting was on a Deco-Turf hardcourt last year in the 1st round in Doha, when Flavia defeated Jie, 6-2, 6-2.

2006 Australian Open doubles champion (teamed with Zi Yan) Jie is now 4-2 in WTA singles finals; she reached the Warsaw final last year, and won the Hobart, Tasmania title in 2004. Jie had a 27-25 singles match record in 2011.

2011 Australian Open doubles champion (teamed with Gisela Dulko) Flavia is now 9-12 in WTA singles finals; in 2010 she won in Marbella and reached the Auckland and Palermo finals. Flavia was 33-21 in singles matches last year.

(Dec 23, 2011) WTA #4 Maria Sharapova has withdrawn from the Brisbane International because her left ankle, which she injured in Tokyo on Sep 29, is "not 100%." However, Maria expects to be ready to play in the 2012 Australian Open. tourney story

(Dec 19, 2011) Former WTA #1 Venus Williams has withdrawn from the Auckland ASB Classic citing ongoing health issues due to Sjögren's Syndrome, which causes causes fatigue and joint pain. After playing exhibition matches earlier this month, Venus decided she was not yet ready to play. tourney story

The Hong Kong Tennis Classic exhibition tourney (previously known as the World Team Challenge, JB Group Classic & Watson's Water Challenge), which was always played during the first week of the new year, has been "postponed" (i.e., cancelled) due to a lack of sponsors Gulf Times story.

This page's URL is: http://tennis.quickfound.net/wta_results_2012/brisbane_auckland_results_2012.html